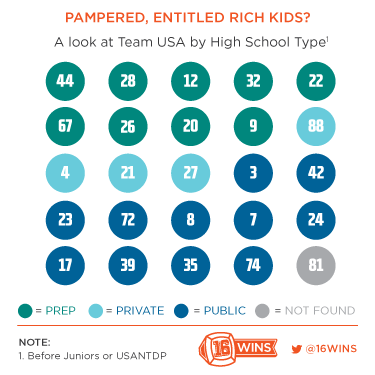 I’m a bit late to the party, but, let’s look at Ken Campell’s stated perceived notion that

in the United States of America, hockey is the exclusive domain of pampered, entitled rich kids.

Let’s do this by looking at Team USA’s Sochi roster. I figured the easiest thing to do is to look at each player by what type of high school they attended (before juniors or US Developmental team for some players). This probably isn’t the most scientific method and I get that there are scholarships to private schools and rich kids at public schools, but I wasn’t going to stalk each player’s parents to find out their tax bracket.In the end, what does the graphic show? That the team is pretty much split down the middle on Prep/Private or Public school attendance. So, if you are saying pampered rich kids cost the US the bronze, then it was half of the team that couldn’t handle the disappointment of the Canada loss (Nice work one percenters letting down your hard working blue collar teammates). Or maybe, it had nothing to do with it and they just played really, really bad.PS- I did try to find Team Canada’s split too. But, I could only track down 10 players high schools via search. The spilt for the ones I found was: two prep, four private and four public. At least for those ten, pretty much the same level of pamperedness.